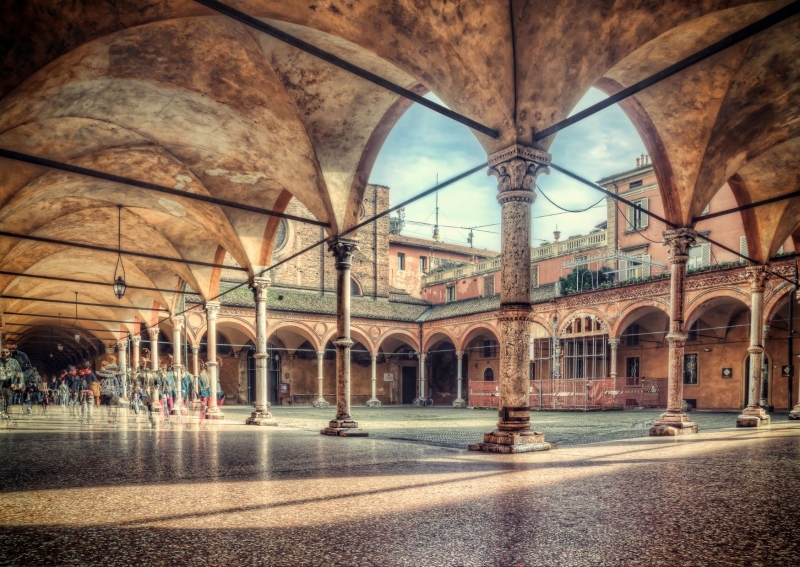 Symbol of the city, the porticoes are developed for about 50 kilometres in and out the city downtown. This architecture element is peculiar to Bologna and dates back to the middle ages.

The urbanization as well as the presence of the University both contributed to the fast development of the city, which in XII century was the 5th one in Europe for the number of inhabitants, about 60.000.

Because of the overcrowding, at the beginning the people started to close their balconies with wooden porches, then they built new rooms leaning out towards the street. Originally the portico was a kind of wooden balcony built on the facade of the buildings in order to enlarge the upper-floors living place. Gradually, it was necessary to underpin the balconies with beams and pillars.

Little by little his new urban element, the portico, became mandatory for all new buildings. In facts it responded to the need of more residential space inside the city walls, as well as more public space without taking up room from the narrow medieval alleys. The portico gave shelter in case of rain and protected from the blazing sun, it offered more room to the craftsmen workshops. The portico is the link between the private and the public space, an open-air gathering place, symbol of Bologna’s hospitality.

The longest porticoed street of Bologna is the one leading to the Basilica of Madonna di San Luca, a shrine located on the top of a hill overlooking the city. The portico is about 4 kilometres long and counts 666 arches which link the city to the sanctuary.

The porticoes which are running for the candidature are the ones of San Luca, Palazzo della Mercanzia, Santa Maria del Baraccano, Piazza Maggiore with Palazzo Re Enzo and Nettuno, Pinacoteca Nazionale, Certosa Cemetery, Alemanni, Piazza Santo Stefano, Via Galliera, Via Manzoni, Via Zamboni, Via Farini, Barca, Piazza Cavour, Strada Maggiore and MAMbo.