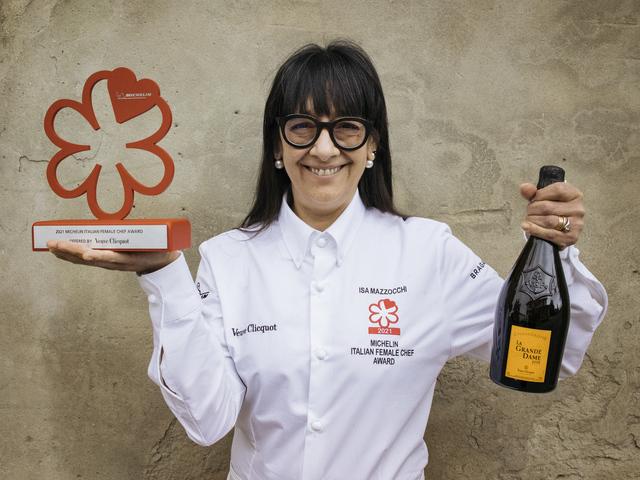 The best 2021 female chef comes from the Italian Food Valley

The Atelier des Grandes Dames by Veuve Cliquot is inspired by the figure of Barbe-Nicole Ponsardin, Madame Clicquot (1777-1866), who at the age of 27 took the reins of the prestigious maison, becoming one of the first female entrepreneurs of the modern era. This extraordinary woman known as the “Grande Dame of Champagne” was ahead of her time, and thanks to her out-of-the-ordinary determination and foresight, her wines arrived on the tables all over the world. She is responsible for incredible innovations such as the first Rosé Champagne from blending in history, the invention of the table de remuage, a table that tilts the bottles, gradually sliding the sediments towards their neck, the creation of the first Vintage of the Champagne region.

Sharing, professionalism and savoir-faire, responsibility and leadership, resourcefulness and daring are the values and criteria considered by the judges for the awarding. The Michelin Guide has awarded Isa Mazzocchi for the “her strong bond with her territory, which she promotes through her dishes and cuisine, in which she invests all her energy”, ranging between past, present and future to bring the guest into a timeless experience”. Isa Mazzocchi can be considered an ambassador of the Italian finest dining, for her love for the tradition and creativity in reinterpreting the local cuisine.

In conclusion, the Michelin Guide has awarded 197 female starred chefs, 42 of which are Italian. So nearly one-fifth of the starred restaurants led by a woman are in Italy. One in particular is in Emilia, the Italian food valley, its name is La Palta and it is led by Isa Mazzocchi.