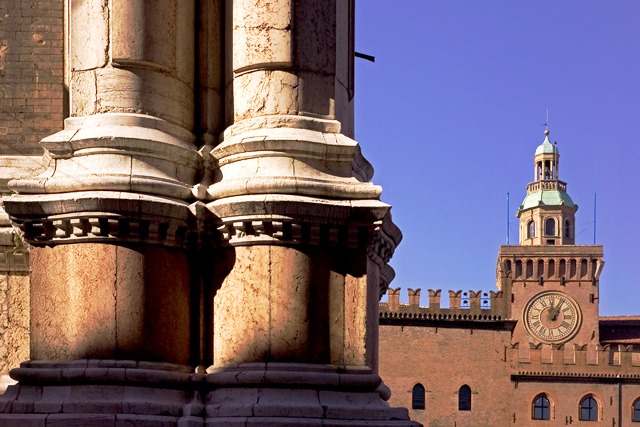 The Bologna Accursi Tower is back!!!

Undisptued symbol of Bologna, the towers were originally built as important military fortifications and also to advertise a family prestige, social status and political affinity. Each tower has its own personal history: glory, love, humiliation, prison… A stroll in Bologna brings one back to this old time! Let us introduce some of Bologna most prestigious towers.

Firstofall, the tallest, the Asinelli Tower. It is 97,20 meters tall and was built in the first years of XII the century. It is open to the public and if you want, you can climb to the top but, bear in mind, you’ll have to climb 498 steps and there is no elevator!

Next to the Asinelli is the Garisenda Tower, which is addressed as considered Bologna leaning tower. Described by Dante Alighieri in his most famous poetic work “The Divine Comedy”, the Asinelli is 48,16 meters high with a slope of 3,22 meters! At present time it isn not open to the pubblic beacuse under restauration. We look forward to visiting the Garisenda very soon!

Dating back to the XII century, the Prendiparte tower is now 60 meters high and its 12 floors are easily accessible. Over the centuries, it has been under the ownership of various families and it was also converted into a prison for an archibishop. Today, we can still admire the devotion or goliardic sketches drawn on the walls by the prisoners. From the terrace at the very top you can enjoy one the most beautiful views over Bologna!

Located at Piazza Maggiore, the city main square, the Accursi Tower, also called the Clock Tower, is different from the other descibed up above. In facts it originally belonged to family, but then it bacame a public one. The tower owes its name to Accursio, a student who arrived in Bologna to study law. In 1250 since he had became an distinguished jurist, he decided to build a huge property which included his residence, a school and a tower. In the XIII century the City Council bought the property which changed the desigheted use several times. However, since 1451 the tower was referred as the clock tower becuase of the huge mechanic clock which substitued the solar one which has always been the reference to calibrate the city watches.The tower, closed for nearly two years, has just been reopened to the bublic after a restaurantion which has brought it back to its original splendour.